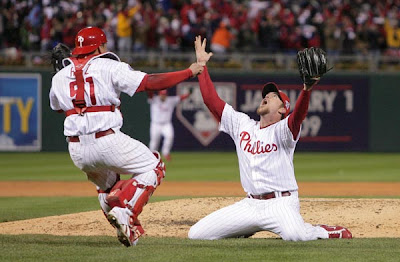 Did Pat Gillick know that Brad Lidge was not going to blow a single save when he signed him? Because, shit, that's what happened!

Lidge got save number 48 (out of 48) and the Phils TCOB tonight, with Golden Cole taking home some sort of automobile as the 2008 World Series MVP. Sports website ESPN.com had a picture of Ryan Howard, his brawny arms stretched upward hoisting the holy hardware that is the World Series trophy. FOX's postgame interview featured Jeannie (two N's?) Zolasko interviewing a gap-toothed and gangsta-articulate Jimmy Rollins with 45-year-old who-just-lectured-his-daughter-about-the-dangers-of-unprotected-sex Jamie Moyer throwing an arm over his shoulder.

Nothing much was made of Chase Utley, and his fake n' throw to home plate in the 7th, which should be considered the greatest fielding play in modern World Series history when all the dust settles. The dust, of course, being the preoccupation with mafioso Allan "Bud" Selig and Mother "Whore" Nature. Don't let these factors obscure the precious reality:

The Philadelphia Phillies are World Champions. Meaning, we own China, Columbia, Bratislava, and even Spanish Harlem. The word "Phillies" still shows up as misspelled in the blogger type box. Bull SHIT. That will change soon.

Tampa Bay's young players (who they will never be able to sign in 3-4 years) should feel no shame in losing to the true Team of Destiny. The brash Rays got hot and beat the Red Sox, and then choked in the Final, their cockiness undone and their inexperience exposed. More was made of David Price than Sarah Palin's wardrobe in recent weeks, and nincompoops like the oddly employed Fernando Vina on ESPN insisted that the real story in MLB this year was the "emergence" of the Rays.

So with disrespect coming from all sides (Peter Gammons declaring this the worst World Series ever, non-stop coverage about the Rays' "miracle" season), I feel like it's worth noting to everyone in the Chicago, Boston, and Anaheim area codes:

The Phils would have beaten you, too. 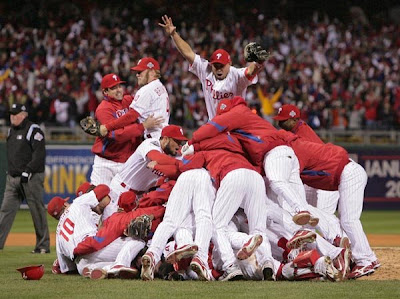 Yeah... The Phillies. With their Lights Out closer and their incredibly clutch Ace. Don't forget our #2, Mr. Myers, who spends his off days shooting machine guns to take his mind off shooting moving human targets. But maybe the biggest performance came from Joe Blanton, with his bulldog approach to the mound AND the plate in a crucial Game 4 victory. Blanton, with his Sonic the Hedgehog haircut and differently colored goatee, was the Phillies "prized" mid-season acquisition.

Yes, the quotation marks denote sarcasm. People in Philly were flabbergasted when the Phillies opted to trade for Fat Joe over elite starters Rich Harden and CC Sabathia. Those guys ended up pitching for the Cubs and Brewers respectively, and can currently be found at a golf course or strip club near you.

1) Buffalo Solja's grand slam vs CC in Game 2 got the the Phaithful (me included) believing. First grand slam in Fightin' Phils playoff history.

2) His mojo-injecting 2-run homer off Derek Lowe in the 7th inning of Game 4 of the NLCS not only tied the game, but was probably the greatest home run in Phillies history. If Shane doesn't hit that ball out, Manny Ramirez brings the trophy to Hollywood and loses it in a pile of dirty laundry.

3) He drove in the first 2 runs of the clinching Game 5a/5b. Throw in his perfect fielding and jovial spirit and you have yourself the 2008 Playoff MVP.

Others worth mentioning: Chooch Ruiz, Peter Happy, and JC Romero.. Latino contingent getting it done. Jayson Werth, who can now resume his double life as the lead singer of Creed. Ryan Madson, who makes the FOX speedometer sizzle. Pat Burrell and Jimmy Rollins, who have been in the Illadelph since Y2K. Ryan Howard, who is what every little boy in America should want to be.

The Will of our City overpowered Milwaukee, Los Angeles, Tampa/St.Petersburg, Major League Baseball, News Corp, and Mother Nature. A shadowy curse 25 years in the making is revealed to be nothing more than a prelude, and a ball club 126 years in the record books tastes its second sip of champagne.

And thank you. Thank you so much. 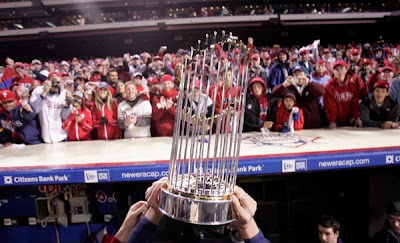 i'm finally reading this a few weeks post-Championship. That picture of Lidge and Ruiz makes me a little misty-eyed every time I see it. Love the comment on Blantons two-toned hair btw.