When Shane Victorino hit the 2-run homer that tied Game 4 of the NLCS vs. the Dodgers, the exuberant Hawaiian pointed to the sky and at a stunned Dodger Stadium crowd as he rounded first base. Despite the incredible significance of his clutch shot, Victorino was ragged by his teammates for the unnecessary gesture. It was a little too amateur, a little too Jose Reyes, for this polished Phillies group.

So when Jayson Werth launched the cowhide high into the warm October sky, he too spread his pterodactyl wings and pointed up to the stands as he crossed first. Back in the dugout, he was greeted by none other than Victorino, who playfully jabbed a finger in the air and asked, "What's up there?"

Yes. A whole lotta deliriously happy people who are on the verge of creating national headlines: "PHILADELPHIA IN FLAMES!!!"

The crowd was already on fire after Ryan Howard finally ended the World Series of Choking with his opposite field blast in the 4th and put the Phillies up for good. Howard the ticking time bomb had finally gone off, and the hour of emancipation grew closer yet. 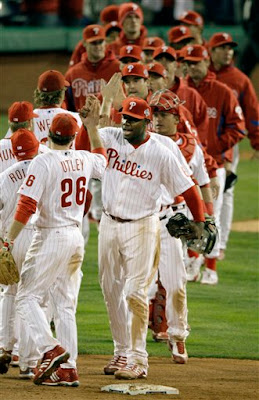