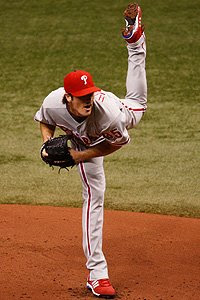 Winning that first World Series game is like getting your first kiss... you wait 15 years, and then when it happens, it's just as good as you dreamt it to be.

The din from the magical '93 playoff run can finally began to fade now as the '08 Phillies seem hell bent on fulfilling their own destiny. Last night was super sweet for sure. The 100th win of the season begin to crystallize before the first pitch, when the remaining sober members of the Backstreet Boys disgraced Tampa Bay, Philadelphia, and our national pasttime with their fruity rendition of the Star Spangled Banner. Surely, World Series baseball was not meant to be played in western Florida.

Another good sign was when living legend MICHAEL JACK SCHMIDT introduced the Phils' lineup. The hall-of-famer embodies class and and exudes grace, and just the sight of him was enough to give me chills. Then, the Rays lined up for roll call and introduced themselves like it was "Global Guts." It may have been FOX's worst idea since that dancing football robot that everybody hates.

Chutley's 2-run slice job was all Hamels, Madson, and Lidge needed to guide the Fightin's to the ever crucial Game 1 victory. It almost was a bunt single down the left field line, as Joe Scorcese opted to put the Howard shift on for Chase. If he was as smart as his glasses make him look, he would have put his fielders in the right field seats.

The Phils' aggressiveness backfired when Shane Vic was thrown out at home after tagging up on that pop fly, but it sent a message. We came to play. We came to win. And even when he's not hitting grand slams or making leaping catches, Buffalo Soldier still finds a way to lay a hit on somebody. Attaboy Shane.

About the only negative to be drawn from this game was the glaring 0-13 line with runners in scoring position. Ryan Howard looks like he just rolled out of bed, but he still has a few games to find that home run swing that's been missing through 10 playoff games. With righty James Shields on the mound tonight, look for the Big Boy to go Coco Crisp on his ass.

Tonight's score: 8-6 Phillies. Myers hits Longoria in the head (by accident) and then strikes him out 3 times. Pat Butt goes deep. And if you haven't checked ESPN yet, they stole the title from me.
Posted by ONE GOAL at 6:48 AM