Although the weather is the same, it's certainly been awhile since the Phillies rode off into the sunset with that dangerously shaped World Series trophy. Things are changing. We now have a polished, competent leader in the White House, who happens to be a black man. The decaying economy is eliminating jobs and ruining lives. But if there is one thing you can always count on, it's the Eagles losing in the NFC Championship Game.

But to the Chicago/St.Louis/Phoenix/Arizona Cardinals?? That was a little hard to swallow. Fittingly, the newest team to break Eagles' fans hearts could not get it done in Tampa Bay last night, losing to the Pittsburgh Steelers, who now have to be considered the greatest NFL franchise ever. Mookie Wilson, a dear friend of mine and the only Cardinals fan in the world, even returned to the desert in the hopes of watching his team get a taste of that East coast glory. He ended up getting a whiff of Lombardi's ass after the Steelers dramatically ended the Cinderalla story with a two-minute drill for the ages. Cardinals fans from Tuscon to Tel Aviv should gain perspective from the realization that they had foolishly been pinning their hopes on... the Arizona Cardinals. Not to be a hater, but any team that loses games by scores of 48-20, 47-7, etc. probably doesn't deserve to win the Super Bowl.

The Steelers' Sixth Super Bowl triumph has to go down as the greatest Super Bowl ever. I wasn't in the country and did not see the Super Bowl last year, so technically it never happened. I can't even remember a Super Bowl moment since seeing Janet Jackson's nipple. But in the new parity-ridden NFL, with its figurehead #1 seeds and division-winning Arizona Cardinals, should we expect nothing less than a hotly contested great game in the Big Show?

Just a few observations from the Stupid Bowl:

* Hopefully, Big Ben beats that shit-eating grin off Eli Manning's face. Ideally, in a dark alleyway in Jersey City, with Eli wearing his bicycle helmet and Ben not wearing his. Pausing for a second to recognize the fact that it actually is possible to have downs syndrome AND win the Super Bowl, I almost have no more will to write or live. I cannot wait for the comical, anti-climactic continuation of Eli's career.

* Even if he never wins another Super Bowl, Kurt Warner should be in the Hall of Fame one day. Give this guy 1 or 2 decent targets to throw to, and he can take your team to the Super Bowl. Amazing. Of course, Kurt is most famous for being the catalyst of the 1999 St. Louis Rams team that changed NFL history. Before that season, it was always easy to predict which teams would be in contention for the Supe at the beginning of the year: Dallas, San Fran, Green Bay, Buffalo (not really), etc. Now it's impossible to rule any team out, no matter how terrible the coaching staff, roster, or team history is. That's why I'm putting money on the Cincinnati Bengals to win it all next year, over the Eagles, in a game that goes to 5 overtimes.

* Offering free food at half time is great, but it's ultimately a fringe benefit negated by NOT HAVING ANY BIG SCREEN TV'S ANYWHERE, and only turning on the game sound at the end of the 4th quarter. I need to hear John Madden say the word "bullrush" five times in the span of ten seconds, punctuated by incoherent babbling and weird gurgling sounds. Shame on you, Chelsea Brewing Co.

* Can Al Michaels and John Madden work the Super Bowl every year? I'm not the hugest fan of either, but consider the alternatives: Fox's team of Droid Joe Buck, Buck's Aikman Boner & Troy Aikman - no thanks - or CBS's pairing of Jim Nantz and Esiason/Simms/who cares, in which case I'd opt for the jukebox. 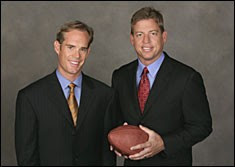 Thank god this is a waist up shot.

* Larry Fitzgerald is God's gift to football. Seriously, he is the perfect wide receiver. Larry the Legend has the perfect combination of size, strength, hands, timing, and SPEED. Plus, he has those sweet Marley dreads that wave tauntingly in the faces of defenders as he blazes off to the end zone like he did last night. No wonder Anquan Boldin is unhappy: he's playing second fiddle to Yo-Yo Ma. EARTH TO DONOVAN MCNABB, get Anquan's digits and hit him up like he's T.O. and it's the '04 Pro Bowl. DO IT NOW. 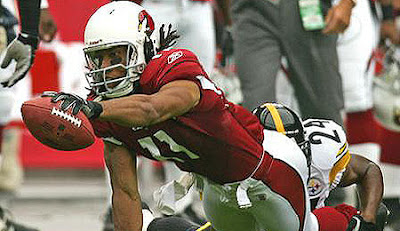 * Thanks to the Syracuse basketball team falling apart before my eyes, I have no choice but to look forward to baseball. The Phillies coming off their dream championship season, and the NY Mets and Yankees spending millions of dollars on new players and billions on new stadiums, only to miss out on the postseason yet again. I can't wait.
Posted by ONE GOAL at 6:28 AM

The cardinals kicked the shit out of the eagles. Grow some balls and learn to deal with real pain. You call yourself a football fan?