In the interest of upholding the integrity of prognosticators anywhere, this post should have been made BEFORE the Eagles 38-3 joyride over the hapless Rams. But I didn't get around to it because I'm lazy, and I also had a run in with the Pussycat Dolls this weekend (still brushing my shoulders off).

Seriously, this is quite possibly Donovan McNabb's last season under center as quarterback of our Philadelphia Eagles. But the Syracuse legend and the greatest quarterback in the history of the Philadelphia franchise still can't seem to earn the benefit of the doubt from a fickle, resentful Philly fan majority. The memory of his scatter-brained performance in Super Bowl XXXIX will undoubtedly resonate in our collective subconscious for ages, or at least until the Birds redeem themselves in the Big Show one of these years.

One misstep, one bad game, and #5 will hear the boos from the Philly faithful. A precedent that was established way back at at the 1999 NFL draft continues to echo and haunt the remade quarterback, as his street cred and margin for error shrink with each injury plagued season. But does Donovan really deserve this duplicitous treatment? Honestly, are we better off with Kevin Kolb right now, or were we any better off with Jeff Garcia in '06, or Doug Pederson in '98?? 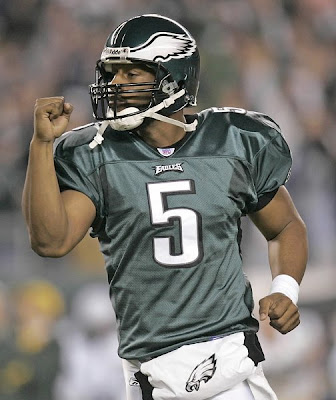 This dude is the best quarterback you have ever seen don the winged helmet, period. Granted, this post is coming after a game that saw D-Mac put up almost 300 yards passing and 3 TD's in the first half alone. We witnessed a Donovan that was not even pretending to be the scrambling impresario that led the Eagles to multiple playoff births earlier in the decade. He trotted out of bounds on multiple occasions, smartly avoiding even the slightest chance of injury. His throws were accurate, his body language confident, his game all around tight and crisp. No chest pounding or pointing to the sky after scores, either. This version of McNabb has been there, done that. Could it be that Donovan has become a true veteran, poised to finally lead this team to the promised land?

McNabb will forever have the benefit of the doubt from this Cuse alum, but the same can't be said for the typical Eagles fan (K, you reading this?). Yes, he does drive me crazy sometimes. His standard bullet-throw-straight-into-the-turf has become a staple of Eagles offensive failures, and he's definitely made the absolute least of an already weak receiving corps at times... crucial times. There is a history of Donovan coming up small in the big games, going back to his underwhelming performance at the '99 Orange Bowl for the Syracuse Orangemen. If you have doubts about McNabb's college career at SU, though, refer to the following Wiki citation:

One of the most decorated athletes in Syracuse University history, McNabb was a four-year starter at quarterback and a reserve on the school's nationally ranked basketball team. On the gridiron, he was named the Big East Conference's offensive player of the decade' for the 1990s, and offensive player of the year an unprecedented three times from 1996-98, as well as the first-team all-conference vote earner in each of his four seasons. Later, he was named to the Syracuse All-Century Football team. 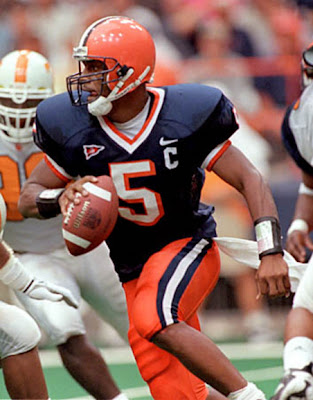 As an Eagle, McNabb already owns or will break virtually every significant passing record. The disappointment from the last three football seasons in Philadelphia has obscured the sparkling highlight plays that McNabb is capable of producing on any given Sunday. He gives us a chance to win against anybody, in any game.

The point is - you're going to miss Donovan McNabb once the Kevin Kolb era starts. You're going to miss the effortless 90 yard bombs to Hank Baskett, or the sound-splitting lasers to whatever other scrubby receiver the Birds are currently employing. Kevin Curtis will be back eventually, and DeSean Jackson is beyond words at this point (post soon to come). When you throw in a healthy LJ Smith, and the always dangerous MVP-caliber Brian Westbrook, you realize that McNabb has quite an underrated arsenal at his disposal.

Next week is the true test in Dallas. Nationally televised game. It makes me think back to 2004, when the Eagles torched and embarrassed the Cowgirls on Monday Night Football, 49-21. McNabb was throwing TD's to TO back in those days, but now Terrell Owens plays for the enemy. The enemy is formidable, and this blogger will be getting rowdy for that game FO SHO.