"Take That China, You Little Bitch!" 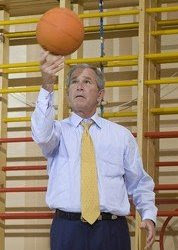 Undoubtedly solving our nation's economic problems and housing crisis from his iPhone, George W. Bush presided over the USA v. China matchup in Beijing on Sunday. Flanked by Daddy Bush and Jerry Colangelo, Dubby was spotted by the NBC cameras pumping his fists gleefully after alley oops and monster jams from LeBron and Co. In an odd twist of fate, I was at home pumping my fist with him, even shouting "Yee-haw, Dubby!" when I saw him pop up on my screen. The USA Men's Sr. National Basketball Team has stirred such a feeling of national pride within me that I even applauded Bush as he left with 7 minutes to go in the blowout victory, waving to the USA Women's Basketball team who reluctantly waved back. Well done, President Bush; America is still the best at something. USA! USA! USA! 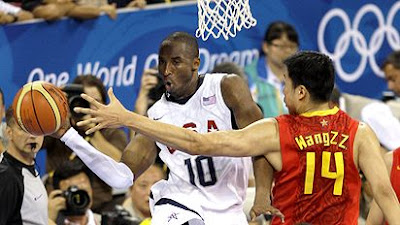 The Americans were clearly the more talented side in this lopsided affair, but the game represented much more to the 1.3 billion Chinese citizens, and a USA basketball program in a dire state of disarray. After failing miserably in Athens 2004 (and yes, anything less than Olympic Gold in a sport we invented is failure), Team USA rolled into Beijing packing heat: LeBron. Melo. D-Wade. Dwight Howard. KOBE.

While the Dream Team would probably school these dudes, the "Redeem Team" has what it takes to bring Gold back to the Red White and Blue. And compared to the rest of the Olympic coverage, this team will entertain the shit out of you. You may even remember why you love America.

Just a few observations from the Redeem Team's 1st game: 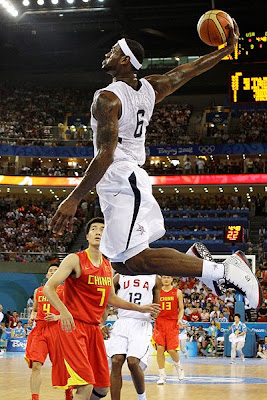 * LeBron James is the best baller in the World. End of story. Hey, Kobe Bryant is amazing, and a phenomenon on his own right. But you want to tell me that LeBron wouldn't have won 3 rings playing with Shaq in his prime? Kobe is 29, the defending MVP, and at the peak of his physical prowess. But LeBron is 27 days younger than me - 23 - and has already surpassed Kobe in pure athleticism, and is a game-changing force on the court. He is the vocal leader of this team, his boys, my generation. All he has to do is improve that outside shooting and we're looking at the next President of the United States.


* Jim Boeheim on the bench. I love how Jimmy B, the coach of the Syracuse Orangemen hoops team, is Coach K's default sidekick. Or maybe he's just there to keep the pot-smoking, drunk-driving, headband-rocking Carmelo Anthony in check. 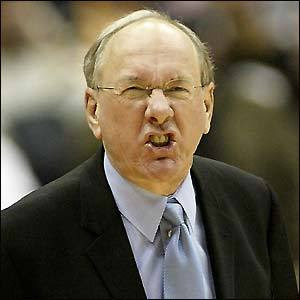 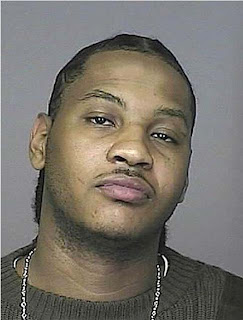 * They fucking LOVE basketball in China. Did you see that halftime feature? It seems like every teenage boy in China dons an NBA jersey and styles himself after Lil Bow Wow. 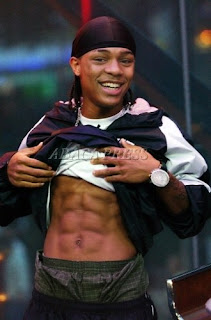 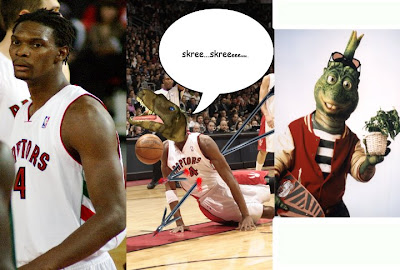 * Between Deron Williams and Jason Kidd, this team has 1 white guy. JUST AN OBSERVATION. Like David Brent, I'm colorblind, seeing neither color nor race. Oh wait, I forgot about Tayshaun Prince - make that 1.5 white guys.


* Coke commercial is 1st class. LeBron and Yao are perfect global ambassadors for the sport of basketball, and two all-around good guys. The graphics and animation were top notch, and who doesn't love Coke? Globalization is awesome.


* No Iverson = What a huge difference. As the Denver Nuggets are now finding out, AI just ain't a winner. He's a self-aggrandizing asshole who is better suited for the And-1 Mixed Tape Tour than Team USA. With his shoddy play and bickering with Larry Brown at the 2004 Athens games, I blame Iverson FULLY for ending USA's dominant run in international competition. 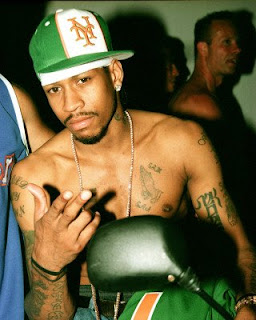 While I did composite the Chris Bosh collage, I did not make that little cartoon of him as a dinosaur, with random arrows impaling his body. Arrows from Turok, no doubt.

hey.. how come no mention of this over at the phan?? http://huggingharoldreynolds.blogspot.com/2008/08/last-night-was-both-gay-community-night.html