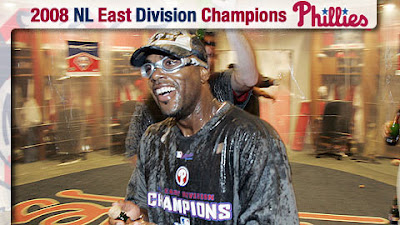 In case you missed it, the Fightin' Phils clinched the National League East on Saturday, putting up win #91 and making the question of what the idiots at Shea were up to totally irrelevant. The Mets, as it turned out, lost their final game to Florida on Sunday, and will not be in the Playoffs.

The temptation to write about the Mets collapse is almost unbearable. After getting kicked out of that game at Shea, my good-natured bellicosity towards the team and fans turned into a justified vigilante renegade jihad shitstorm of fury. But it's almost too hard to really hate Los Mets fans, because... ouch, that's gotta hurt. I feel bad for you Mets nerds, but that's what you get for buying stock in crumbling geezers like Pedro, Moises Alou, Billy Wagner, etc.

But enough about the New York Mess; this is all about Los Filis de Filadelfia. The Phils' final record of 92-70 is their best regular season mark since the magical 1993 season, when they went 97-65 and made it to the World Series. That Phillies squad probably had more consistent starting pitching, with Curt Schilling, Tommy Greene, Danny Jackson, and Terry Mulholland manning the rotation. But the overall talent level on THIS Phillies team, which has now won back-to-back pennants for the 1st time since '80-'81, is considerably higher.

The roster is largely homegrown, with it's core group of stars reaching the peak of their abilities at the same time. Hamels and Myers (when they have their stuff) are as formidable a front-end combo as any in the Majors. Jamie Moyer pitches around the same speed as a pre-pubescent middle school softball player, but he's the man who won the division-clinching game for the Phils 2 years in a row now. In the Playoffs, you need 3 reliable starters to win a series. The Phillies have that.

Below: The 74 year old Moyersaurus 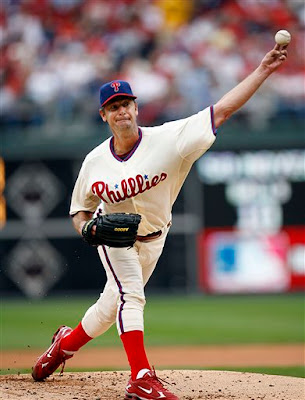 Brade Lidge deserves some Cy Young consideration, after posting a perfect 41-for-41 season saving games. That's amazing! There were many, MANY sticky situations, but Lidge got it done time and time again. The 8th inning proved to be a trouble spot after the All Star break, with the loss of washed up insurance salesman Tom Gordon (probably my favorite scapegoat of all time) proving to be vital. If the starters can eat up at least 6 innings, J.C. Romero and Ryan Madson will be a big part of the bridge to Lidge.

The lineup has many weapson, including an absolute monster named Ryan Howard. The 2-time National League MVP (I'm going to go ahead and award it now) pretty much carried the Phillies through September, hitting bomb after bomb to left center, the upper deck in right, and Camden, NJ. 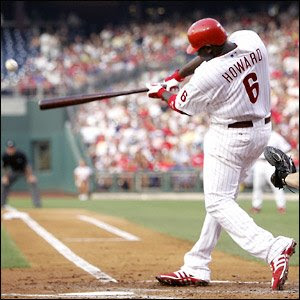 To beat Milwaukee, and beyond, the Phillies need excellence from everyone from Charlie Manuel to Tadohito Iguchi / So Taguchi. It's going to take good at-bats from Pat Burrell, base-stealing from Shane Victorino, and not-striking-out from Howard and Werth. But that's for the next blog post. For now:

THE PHILLIES WIN THE PENNANT, BIOTCH
Posted by ONE GOAL at 2:57 PM