Why Do Us Suck?

...in April? I thought after winning the World Series, these guys would come out with a renewed purpose and prove to the skeptics (namely, everyone) that 2008 was no fluke. All they’ve proven so far is that April in Philadephia is a month best spent analyzing the NFL Draft. Of course, last season’s World Fucking Champions also started out 0-2, 2-4, and 4-6, before finally catching fire after the Eagles squandered yet another draft day opportunity. 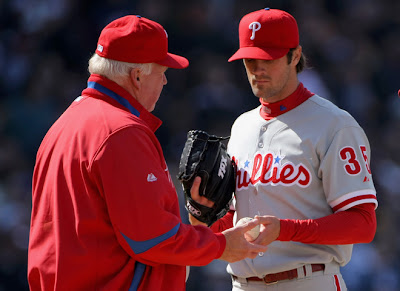 They’ve been to the mountaintop, but now a larger mountain looms. It’s a peak no MLB team has scaled since the Yankees in 2000: the task of becoming back-to-back champions. They would be the city’s first back-to-back champions since the Flyers in the 70’s. But more than a civic achievement, the Broad Street Bombers winning another title could officially turn Philly into a baseball town, and get some us some goddamn national respect in the process. Even though the Fightins’ figure to bring a stronger squad to the table in 2009, the majority of pundits and experts forecasted Philly to miss the playoffs. The attitude in the sports media (Philly included) seems to be “We’ll believe it when we see it.” Well boys, let's show 'em again.

Here's a few questions and observations from the first week of the season. Feel free to comment or point out factual errors, of which there are probably several.

- Who’s that skinny black dude hitting cleanup for the Phils this year? Seriously, it took me a few seconds to realize that it was Howard and not Jimmy Rollins batting from the left side. Then again, I think all black people look the same, but that okay, because I’m Indian and we all look alike too. But Howard looks trim; that Subway diet is no joke. As I write this he is burning around 3rd base, about to score off an Ibanez liner that nailed Rockies pitcher Aaron Cook in the buttocks. Howard actually looks like an athlete, and his defensive abilities may be bearing the most fruit from his new Kate Moss physique. Fear not, fat first basemen lovers: you still have the Brewers’ Prince Fielder to ogle as his goods jiggle up and down with every slight movement. 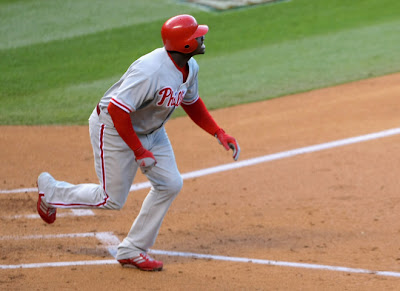 - How long can the Phillies offense bail out the terrible starting pitching? As I write this, Man Ho Park just gave up a homer to pre-pubescent Dexter Fowler to make the score 5-1 Rockies, erasing the Phils lone run scored in the top half of the 2nd. Six games into the season, and the starting pitching has given up a huge lead to start the game in every contest. That’s absurd. Why are the Phillies not in the Jake Peavy sweepstakes? I would not be opposed to parting with Carlos Carrasco in a package deal to land the Padres ace. The starting pitching has gone from a preseason concern to a full-blown disaster in the early going. Screw "quality starts"- I’ll be happy if they can keep it to 1 run an inning.

- When did Maddawg Madson get so filthy? I love it. Ryan had never thrown above 92 in his life until last summer, when he channeled his inner warrior and became Maddawg. Madson now deals his fastball in the 96/97mph range, and has a silly changeup that makes hitters look like clowns. It’s reassuring to have him as the Bridge to Lidge, just in case the Phillies ever give them any leads to protect this year.

- Prediction: Chase Fucking Utley wins the MVP award or a batting title this year. Or both. Unless he fucking fucks it up and gets fucking injured again.

- Anyone else notice how Jon Kruk has changed his look in an effort to differentiate himself from Kenny Powers, his HBO caricature portrayed by Danny McBride? Who you kiddin' Kruk. Bring back the mullet.

- Victorino is fast at just about everything. Before I can even look up at the TV, the Flyin’ Hawaiian is already out and Utley is up. Riding the pine for team U.Suck in the WBC robbed Shane of the chance to get his timing down this spring, but he needs to be more patient in his at bats. The Phils need him and Rollins to set the table so the big boys can eat.

- Charlie Manuel will need to keep the team together. Faced with the prospect of sitting Hamels due to the cover boy’s elbow issues, and without the luxury of a deep ‘pen due to Romero’s 50 game suspension/vacation, Cholly and Dubee will have to make the most of what they have in April and May. The decision to hit Werth in between Howard and Ibanez seems like a genius, if not obvious move. Any lefty reliever brought in to face Howard will next have to face Werth, who hit more home runs vs. LHP than any other player in The Show last year. New kid Raul follows heavy metal Werth to round out the most formidable top six batters of any lineup in baseball. The drop-off after Ibanez is steeper than the price of a Yankee Stadium ticket, but look for the Phillies to score runs en masse in 2009.

- The rest of the division is much stronger this year. Los Mets added some mercenaries and a new stadium in their annual attempt to be the J.V. Yankees. The Braves overhauled their pitching staff and boast my new most hated player, Jordan Schafer, the youngest steroids user in baseball. The Marlins could have the best pitching in the division, and in Hanley Ramirez they have the best ballplayer in the world. The Nationals will continue to struggle until they hire Barack Obama to be their new manager. 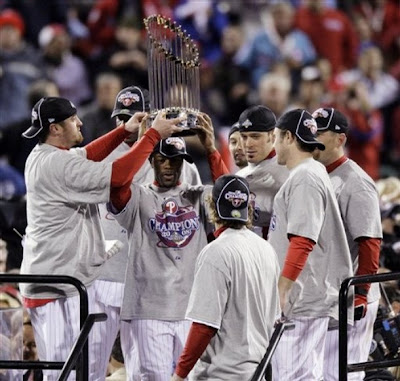